What to do in Dalmatia

Home » What to do in Dalmatia

Thanks to its huge stretch of coast and the hundreds of its fantastic beaches, Dalmatia – the southwestern part of Croatia–is the most significant tourist region and not only in boating circles. Dark blue tinted sea mingling with the often white stretches of sand of the coast, in addition to more than 1, 000 of adjacent islands and islets: these are all there to provide you with an indelible experience. 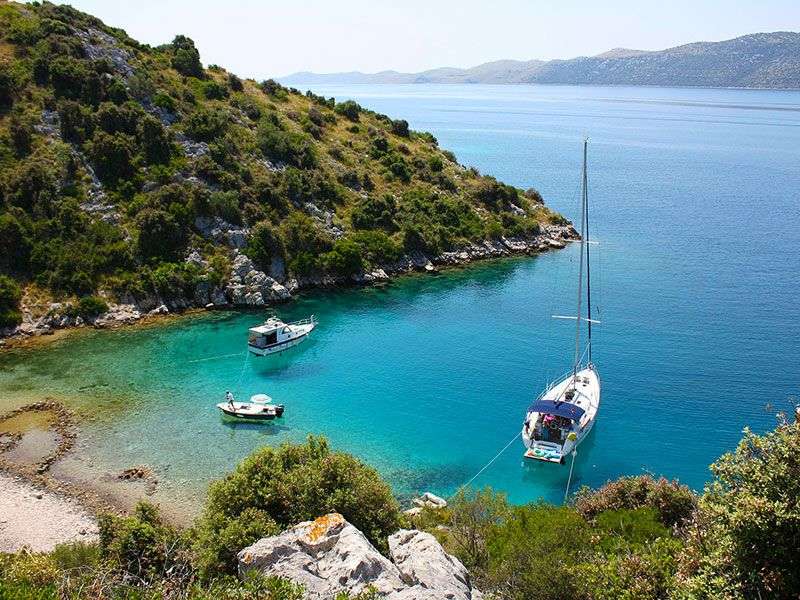 In the article you can read about the followings:

What to do in Dalmatia: The major cities of the three main regions

The region that stretches for as long as 4, 000 kilometres can be divided into three main parts: North, Central and South Dalmatia. The ports with their unequivocal Mediterranean atmosphere, numerous reefs and plentiful beaches– all brimming over with exciting opportunities for all the voyagers sailing nearby. In the summer months the climate is very pleasant; moreover, the sea awaits visitors with an average 28°C temperature. Thanks to the Mistral, the constantly present wind, you’ll be able to cut the waves of the Adriatic with your sails being enhanced by winds of 5-6 strength, measured in the Beaufort scale. However, if you long for calmer seas and ports, you should time your visit to the area between May and June or September and October. Temperatures at those times are still pleasant, however, somewhat milder. Check the sailing conditions and wind rose diagram of Dalmatia.

The most popular city of North Dalmatia, Zadar, with its history of 3, 000 years. Moreover, Zadar is a real metropolis with numerous ports and significant trade. Its old town, situated on a peninsula, is a momentous showpiece of the city’s rich history. To reach this area you only need to take a short stroll through a footbridge and then the city gate.

Setting off from a promenade on the peninsula’s seafront side, travellers get the opportunity to explore the narrow winding alleyways of Zadar’s old town. The promenade can justly be proud of it’s two splendid and modern attractions. It’s home to the scale model of our solar system, the so-called Monument to the Sun. Thanks to the thousands of inbuilt lights, after dark the attraction performs an incredible light show, right under your feet. The promenade’s main attraction, however, is the so-called Sea Organ. The musical instrument creates random but harmonic sounds as a consequence of the breach of the waves on the white stones in which the construction was craved in. This unique musical experience is best enjoyed twinned with the enchanting and romantic view of the setting sun.

The biggest marina, which is probably the closest to the old town as well, is situated in the bay, stretching from the city and looking at the peninsula. Tankerkomerc Marina Zadar awaits sea lovers all year round with some 300 berths for mooring. The marina is suitable to accommodate vessels up to 45 metres length and 8 metres draught.

One of the most famous attractions of Central Dalmatia is without a shadow of a doubt Split, Croatia’s second-biggest city, a UNESCO World Heritage site. There are several ports between the Adrian Split and Zadar. Even in close proximity to Split, we can find a marina that is open all year round, provides 370 berths and is suitable to accommodate vessels as long as 70 metres. Split is home to Diocletian’s Palace which is one of the most significant landmarks throughout the whole of Croatia. The Palace was built by Emperor Diocletian after his retirement. Some 300, 000 square meters sumptuous palace served as his home, where he lived until his death. It is now the Emperor’s mausoleum. There are plentiful shops, restaurants and even a few private apartments in the territory. Read about what to do in Split. 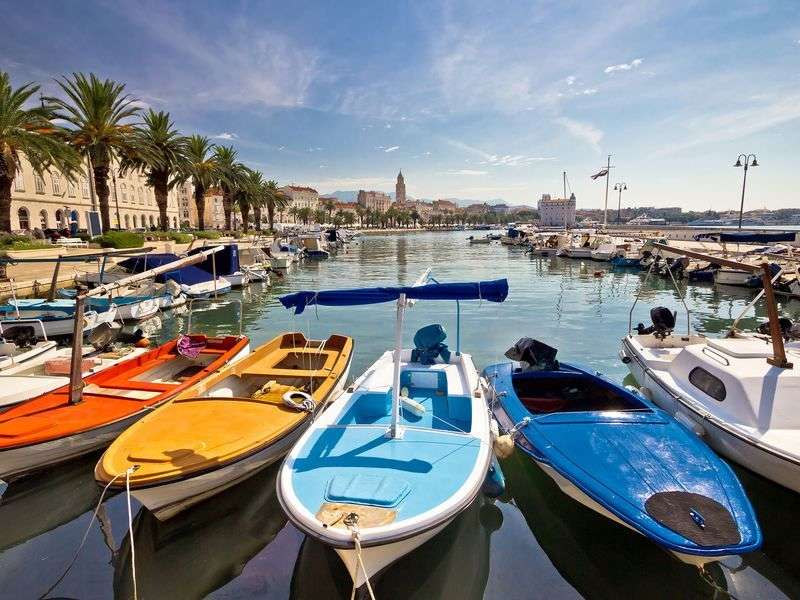 Easily accessible from the island of Brac, is the Makarska Riviera, stretching for about 60 kilometres in South Dalmatia. It’s highly popular among those who wish to travel and relax in a high-quality environment. It’s advised to use the sheltered city harbour which is situated in Makarska bay. Makarska is well known for its exquisite rocky and sandy beaches as well as its pleasant climate and its gorgeous Mediterranean plants. Read about what to do in Makarska.

Things to do in Dalmatia: Explore the diverse Dalmatian archipelago

The archipelago consists of 50 islands and islets, almost all of which are easily accessible from the most popular D-Marin Dalmacija Marina. Most of these islands are tranquil, quiet and suitable for swimming and are enriched with light blue and turquoise-tinted lagoons.

The Kornati National Park belongs to the most beautiful attractions in Zadar’s catchment areas. 150 tiny islands, shallow waters, gorgeous turquoise lagoons characterise the area. A cruise here grants unforgettable experiences. In addition, there are numerous spots within the National Park that are suitable for swimming.

Donji Kornati is part of the Kornati archipelago, offering a spellbinding experience. Here is to be found the probably most awe-inspiring natural phenomenon of the area: the so-called Klifovi cliffs. These mighty cliffs are situated opposite each other, facing the open sea, thus functioning as a natural gate for those arriving on water. Their robustness is simply astounding, they rise as high as 82 metres above the sea surface. The cliffs could serve as perfect diving spots as well. As their submerged parts extend as deep as 100 metres below sea level.

Mala Proversa is a narrow strait between the islands of Dugi Otok and Katine, where you can marvel at the remains of the Roman building complex. The complex is approximately 90 metres long and in the Roman times, it was situated beyond sea level. To add to its incredible diversity, the area counts an additional four National Parks covering the Paklenica karst river canyon, the Plitvice lakes, the Krka River and the Velebit mountain range.

Juxtaposed to North Dalmatia, this region is characterised by the dominance of bigger islands such as Brac and Hvar. The area stretches from Trogir Island all the way to the Makarska Riviera.

The island is situated in one of Croatia’s opulent areas in the eastern part of the Split bay. Its northern neighbour is the island of Brac, whereas in the south it’s bordered with Korcula Island and the open sea. With its 300 square kilometres of territory, Hvar Island is the fourth-largest island in Croatia. Its lands are flecked with light blue bays, olive groves and lavender fields. The most beautiful city of the island is the one with an identical name to that of the island: the city of Hvar. A picturesque bay and innumerable Venetian style buildings and palaces all add to the enchanting beauty of the place. Watching from the sea, one can wonder at the fortress of Fortica majestically looming above the city of Hvar. Read about what to do in Hvar island. 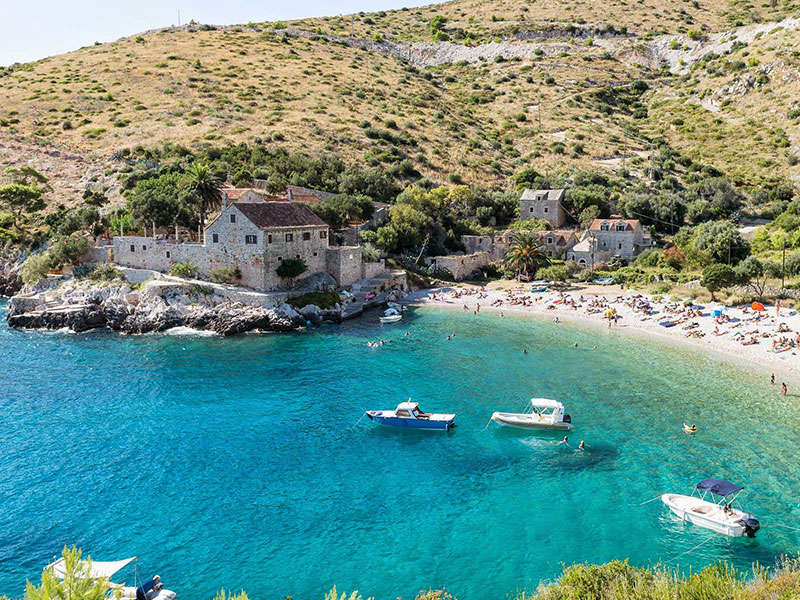 Situated 60 kilometres away from the coast, Vis is one of the Croatian islands furthest away from the mainland. The island is virtually unspoilt, dotted with bays with pristine waters, the most popular of which is the so-called Stiniva bay. Vis is almost entirely covered in woodland thus gaining the title of the ‘greenest island of the Adriatic’. Travellers also have the chance to sail across to the adjacent islands: Sveti Andrija and Bisevo Island, the latter of which is famous for its Baluni bay where the enigmatic Blue Cave–Modra Spilja- is located. Read about what to do in Vis.

South Dalmatia is the region of bewitching natural beauty. It has everything one might need for a pleasant holiday. The area is widely renowned for its exotic beaches, tiny fishing villages, historic towns and their atmospheric old towns.

It’s located in South Dalmatia and with its territory of 276 square kilometres, it’s the sixth-largest Croatian island, whereas its population of 17, 000 residents makes Korcula the most densely populated island of the country. Its name dates back to ancient times and stems from the dark Brunswick green shade the Aleppo pines and parasol pines gave it. The world-famous globetrotter and sailor, Marco Polo, was also born on the island, his house is located in Korcula city. Read about what to do in Korcula.

Dubrovnik is one of Croatia’s most popular and most beautiful cities. It’s a UNESCO World Heritage site and is rich in castles, towers and culture, all encircled by the 1940 metres long city walls. Those who wish to relax in a more active way will indeed be spoilt for choice in Dubrovnik. Visitors can try themselves climbing the Croatian peaks of the Dinaric Alps for instance. Diving and water sports opportunities are plentiful, for which the Lopud Island is meant to be a superb spot. Read about what to do in Dubrovnik.

To whichever part of the Dalmatian coastline the wind happened to blow you, you are granted to have an unforgettable experience. The alluring coastline and its archipelago stretching for 4000 kilometres are brimming over with sights and will surely captivate your heart as well. Read more if you plan sailing in Dalmatia or rent a boat in Dalmatia.