What to do in Brbinj: one of the most important towns on the island of Dugi Otok

Home » What to do in Brbinj: one of the most important towns on the island of Dugi Otok

Brbinj is located on a neck of land on the eastern coast of Dugi Otok. Most of its beaches are rocky, and there are some caves nearby as well. What to do in Brbinj? We have listed the best things to do in town and on the easily-accessible islands surrounding it. 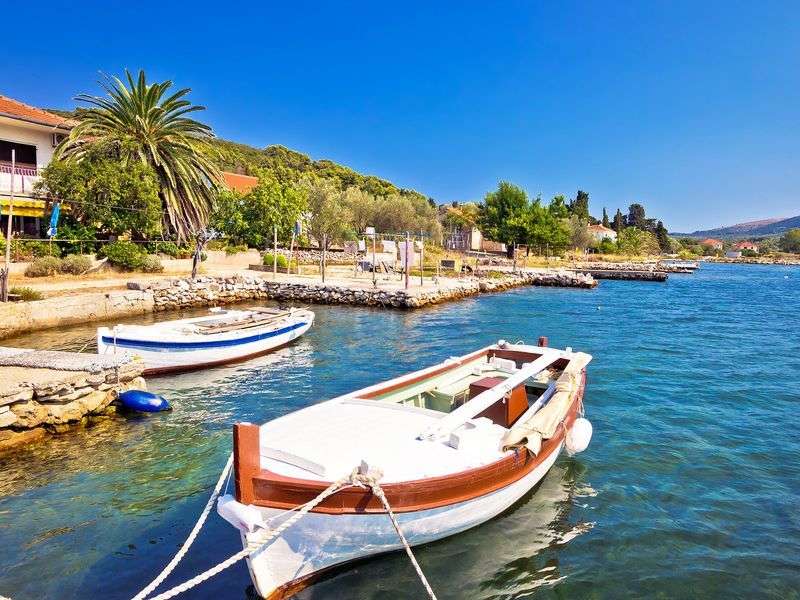 This article summarizes the following:

Things to do in Brbinj: the most popular beaches

Brbinj lies on a hilly strip of land, so most of its beaches are rocky. The shores of Lučina Bay are the most ideal for swimming. There are also some concrete and pebbly parts offering several spots for sunbathing. This area of Croatia is particularly stranded, and as a result, these parts are not crowded at all. Do you prefer sandy beaches? You should go to the town of Veli rat in the northern corner of Dugi Otok, and visit the beach of Sakarun.

What to do in Brbinj: programs for Nature-Lovers

Telašćica National Park, located in the southern end of Dugi Otok, has rich flora and fauna. Exciting sights include the 900-metre-long and 300-metre-wide Mir lake, as well as the cliffs of Strmac that are characterised by a unique microclimate; the two most common types of trees are the Aleppo pine and the oak. It is also a bird protection area: the cliffs are home to several vulture families. If you sail around these parts, you might even spot dolphins.

The Kornati National Park can be found near the southwestern part of Dugi Otok; it is among the most beautiful national parks in Croatia. There are app. 140 uninhabited islands with white cliffs in the area. The 3 largest ones are Kornat, Žut and Piskera. Besides the natural treasures, the archipelago is also unique for its Illyrian castles and ruins of Roman villas. If you are a watersports fan, you will love the fact that the national park is a paradise fo divers thanks to its beautiful diving spots.

Rava is located between the islands of Iž and Dugi Otok. There are two towns here: Vela Rava in the middle and Mala Rava in the northwest. The island is famous for their church commemorating the Lady of Assumption, built-in 1629.

Iž lies between two large islands, Dugi Otok and Ugljan. Its highest point is the 168-metre-high Korinjak. The island is located in the middle of a significant sailing route, connecting Central Dalmatia and Kvarner Bay. Most attractions of Iž are located in the larger town, Veli Iž. You can admire several Romanesque buildings here; the renovated Parish Church of St Peter and Paul stands in the middle of the town. The most important event in the town’s life is the Iž Festival, organised every year on 29th July. During the feast, locals wear traditional clothing, plays traditional songs and dance. They also serve locally-made food for the guests.

The island of Ugljan is located right opposite Zadar. The main attraction on the island is Fort Saint Michael standing on top of a 270-metre-high hill; there is a fantastic view of the surrounding archipelago from up here. Interestingly, there is also a miniature island near the town of Preko called Galevac Island. The Franciscan monastery here is still operating today.

Things to do in Brbinj: Explore the city’s main attractions

Brbinj is bordered by the beautiful bays of Jaz and Lučina. One of the most protected marinas in the area can be found here; the Bora is the only wind present. The most famous attraction in Brbinj might be the collection of Glagolitic scripts; interestingly, these are the oldest written records in the region written in Croatian. Brbinjšćica Bay is located southwest of the town; there are giant cliffs and several caves here. It is also worth visiting the remains of the salt marshes and salt storage from the 12th century and the olive tree plantations in the centre of the village.

The largest town on the island of Dugi Otok is Sali, located south of Brbinj. They organise a festival called Tovareća mužika – donkey music – for their visitors. The festival “Sali Cultural Summer” offers exhibitions, concerts and gastronomic specialties to the guests.
The event called “Saljske užance” has a 50-year tradition. It begins with the “Fishermen’s Night” in August, then different sports contests follow, and the last event is the so-called donkey race.

Grill Šjor Bepo, which can be found near the marina, has delicious hand-made dishes and a friendly staff. If you visit Brbinj, we also recommend the Antonio restaurant; there is a wonderful view of the sea from here.

In this article, we have listed the best things to do in Brbinj. The Northern Dalmatian town has beautiful bays, and the surrounding islands are perfect sailing destinations!