The town of Porec is a buzzing cultural and touristic gem. The Mediterranean region has several world-class historic buildings and beautiful beaches to offer. Porec has become a unique holiday destination due to the mild Mediterranean climate, the soil and the lush flora. The town and its neighbourhood have preserved a lot of antique sights. Spending a holiday here will be like a magical time journey. 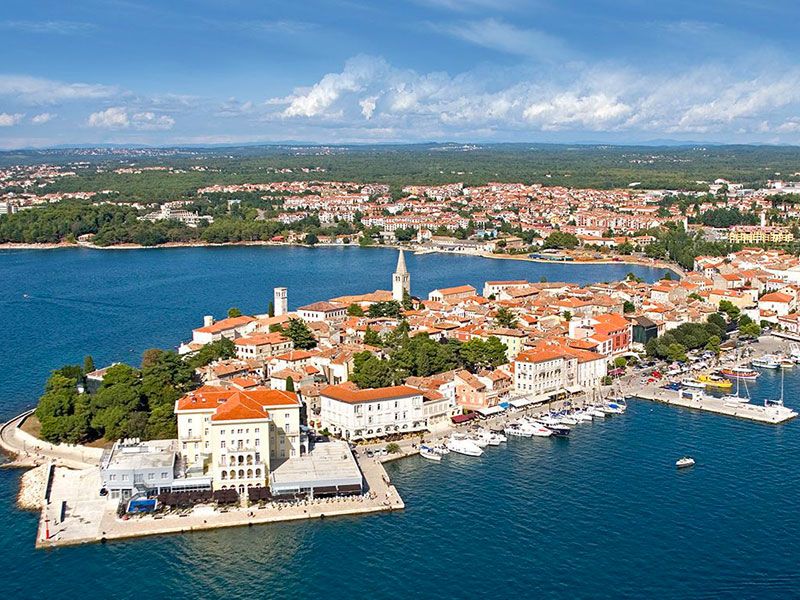 What to do in Porec: Walk through the streets of ancient Rome

Porec was founded by the Romans in the 2nd century. Every street is symmetrical; we can observe this layout on the main streets Cardo Maximus and Decumanus Maximus as well as the centrally located Forum. Fortunately, the town has put a large effort into preserving the most significant and unique parts and buildings. Freedom Square is a perfect starting point for a nice historic walk.

The Euphrasian Basilica is among the best-preserved early Christian complexes and most significant monuments in world history. It is a real architectural treasure that has been a pride of Porec since the 6th century. The building has been an official UNESCO World Heritage Site since 1997.

The basilica is the venue of one of the oldest summer music festivals in Porec. They organise chamber music nights in accordance with a particular topic year by year; you couldn’t wish for a more beautiful ornament for such event than the basilica’s breathtaking chapel. The event is a perfect combination of high-quality music and a beautiful atmosphere. If you wouldn’t miss this special cultural experience either, we recommend that you visit between the 7th of July and the 27th of August. 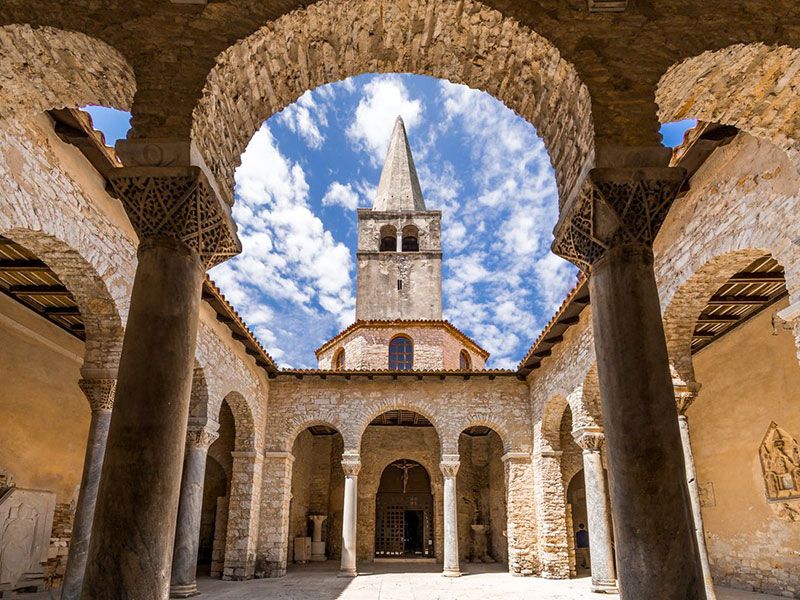 One of the oldest buildings in Porec can be found on Marafor Square. They built the Romanesque house in 13 BC. During its long history, the house has been renovated and expanded several times. Despite the numerous amendments, the house has successfully kept its basic Romanesque characteristics. It was further extended by a balcony in the 20th century. Although the terrace didn’t originally belong to the house, it fits the building perfectly, emphasising the double lancet window and its pointed arch. They sell gifts on the ground floor while the Ethnographic Heritage Collection is exhibited on the top floor. It is a bit difficult to spot the house, so you must pay extra attention when walking in the neighbourhood.

The magnificent palace was built-in 1474 – the year is carved in the facade. It has two wonderful triple lancet windows. Back in the day, reputable, rich families had their palaces built along the main street. The town has preserved some of these buildings on Decumanus Street. The Parisi-Gonan Palace can be found at the 5th, but those on the 10th, 15th and 30th have similar characteristics.

The palace can be found on the corner of Decumanus Street and Cardo Street and functions as a gallery today. The building has three floors; the first two are built of stone and the third one from brick. The latter is ornamented with architectural details made of stone, for instance, a corner fortification and of course the windows. There is also a Gothic double lancet window on the side facing Decumanus Street. They used a different type of imported stone on the other side which faces Cardo Street. Even though they have preserved the original facade, they haven’t kept the interior arrangement.

The Temple of Neptune

The Temple of Neptune was built-in the 1st century on the former place of the Forum which is now Marafor Square. It was supposedly the largest temple dedicated to the god of the sea. This cannot be confirmed though, as we can only see the remains of the giant temple today.

Things to do in Porec: A piece of Nature

They do everything in the Istrian region to protect nature. They established the institution Natura Historica to protect and maintain the unspoiled and clean condition of nature. It is not a coincidence that millions of tourists visit the region to admire the beauty of the Istrian Peninsula and Croatia. 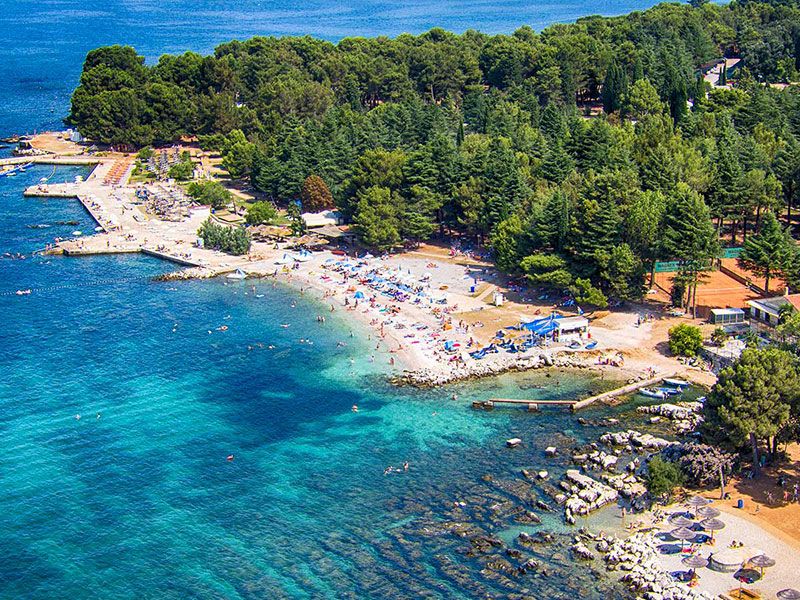 Baredine Cave is located 6 kilometres to the northeast from Porec. The geomorphologic sight is the first spelaeologic site and touristic cave in Istria. It offers an exceptional journey underground. During our trip, we can see 5 well-lit chambers. The tour, offered with English and Italian guide, takes 40 minutes. The deepest point of the cave is 60 metres underground. There is a pleasant temperature of 14° Celsius; it is recommended to wear an extra layer. Dripstones here are famous for their unique shape; one of them resembles Mary and the other may remind us of the Leaning Tower of Pisa.

Saint Nicola Island is located directly opposite the port of Porec. We can choose from many beaches here. There are quieter shores surrounded by black pines and oaks, as well as sandy beaches favoured by tourists. Saint Nicola Island is ideal for sunbathing. There is a park with pines in the middle where we can do sports. Fortunately, they take great care of respecting environmental regulations.

The Lim Canal is a 12-kilometre-long confluence. The breathtaking valley is among the most beautiful natural treasures of Istria. The mountain ranges are getting gradually steeper, even reaching a height of 100 metres at some points. The water here is clean and calm and has a glistening sky blue colour. The region of the channel has been inhabited since the Neolithic. Early settler used to live in the caves among the valley. During the Roman period, the channel was an important administrative boundary between Porec and Pula. This is where its name comes from as well – “Lim” is from the Latin word “Limes”, which means border. The Lim Canal has always been perfect for fishing. They added farmed shellfish to the natural species, and they offer them at the two excellent restaurants nearby.

Towards the centre of the channel along the beach, you will find the Jama Piratov bar. You can immerse in the wonderful landscape while sipping a refreshing drink. The beauty of the area is fascinating: There are magnificent forests, mountains and hills here with azure blue water. 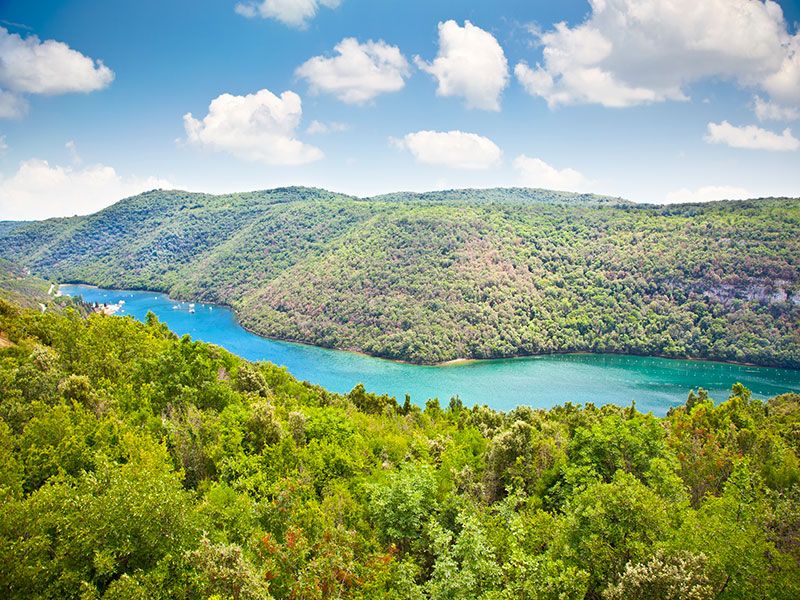 The gastronomic experiences offered in Porec are as rich and diverse as their culture. The region has lush Mediterranean flora with pines, mulberry trees and green bushes. The rich and fertile ground provides perfect soil for cereal crops, vegetables and olive tree plantations. The main agricultural sector in the region consists of olives and grapes, which are the ingredients of the delicious olive oil and popular wines. The town is full of buzzing cafés and restaurants offering the flavours of the Mediterranean cuisine, based on authentic recipes. You can choose from fresh fish dishes and meals made with delicious truffles or homemade pasta. Don’t forget to taste the fantastic Malvazija or Borgonja wines.

Giostra – the historical festival of Porec

The Giostra historical festival replenishes the 18th century and a 300-year-old tradition. Participants in the three-day festival wear elegant Baroque dresses. We can meet nobles, knights, bannermen and drummers. There are performers and jugglers on the main street. Beside the jousts, there are concerts, plays and traditional dances. The authentic town festival is a perfect demonstration of life in the 18th century. They built the track in 1745; the town walls and the windows facing the venue are nicely decorated for the event. 8 knight compete against one another during the tournament. The winner is awarded the Masgalano silver plate. They organise the Giostra around 20th July. If you don’t want to miss this traditional festival, you should definitely plan in advance!

Enjoy the beauty of nature, the salty scent of the sea and the power of the sunshine while you get acquainted with the diverse history and rich culture of Croatia and Istria. The town of Porec is a perfect place for both mental and physical relaxation. Read more if you plan Poreč sailing or rent a boat in Porec.