What to do in Nassau

Home » What to do in Nassau

Nassau is the capital of the Bahamas for a reason. Thanks to its location, it has always been among the most developed towns of the archipelago. There are splendid streets, beautiful beaches and a unique atmosphere that is nostalgic and modern at the same time. The speedboats roaming the sea, the colourful buildings and the nights spent in the casinos may all remind us of a James Bond movie. The town is rich in attractions, and we can get to the unspoiled Out Islands of the Bahamas easily from here. In this article, we are going to list some of the most beautiful places in Nassau. 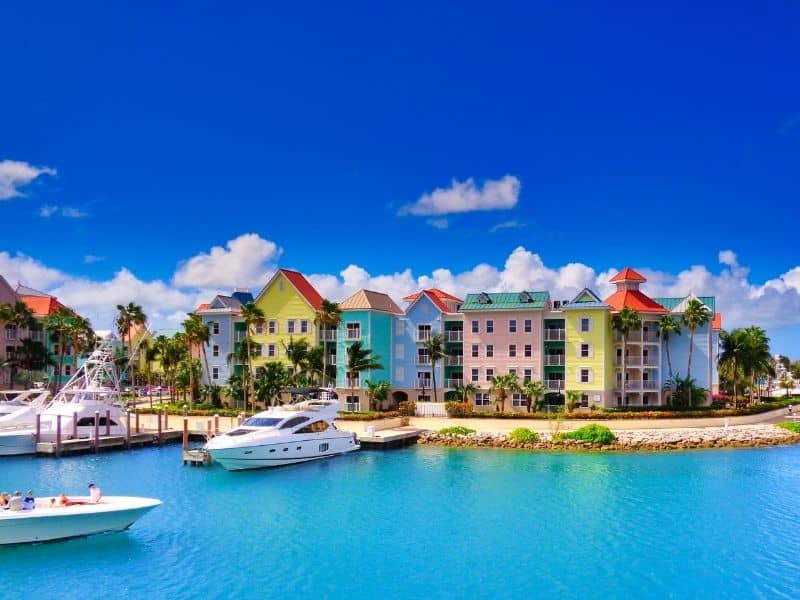 What to do in Nassau: the most beautiful beaches

Beaches on the Caribbean Sea are famous worldwide. The glittering water and the warm white sand have been attracting tourists from all over the world for decades. Nassau often serves only as a passage to the unspoiled beaches of the islands nearby. However, New Providence offers wonderful shores and beaches. If we stay on the island, we can still have the same idyllic holiday experience that makes the Bahamas so popular.

Junkanoo Beach – also known as Western Esplanade – is located near downtown Nassau. The beach is covered by fine white sand, and the water is incredibly clear. If we get hungry or thirsty while sunbathing, we can get a refreshing drink or a delicious snack at one of the beach huts. Life on the beach is buzzing; for instance, locals often organise charity events such as cooking contests. Thanks to its enchanting atmosphere, it is one of the most popular beaches around Nassau.

Cable Beach is a beach of almost 5 kilometres in length, located west of Nassau. It is perfect for a peaceful walk while we can enjoy the pleasant warmth of the sun and the view of the glorious ocean. If we need an adrenaline boost, we can also try the watersport opportunities offered on the beach. There is a beach volleyball court that anyone can use; they are always happy to take new players in, even if it’s just a short game.

Cabbage Beach is among the most popular beaches on Paradise Island. The most exciting activity people do here is gliding. Flying over the ocean while admiring the sun disappearing behind the sea is an unforgettable experience. If we feel that we just need to be alone for a while and have a swim, we should go a little further to the east. There are fewer people on these parts, but the beaches are beautiful all the same.

Things to do in Nassau: historical sights

One of the best things about Nassau is that besides its modern and splendid atmosphere, they have also preserved their rich historical heritage. The old city is filled with masterpieces of colonial architecture, vivid gardens and museums. If we want to dive deep into the history of the Bahamas, we can visit the Nassau Public Library or the Heritage Museum. It is also nice to go on a walk to explore the town and visit the Parliament Square, Fort Fincastle or the Government House.

Fort Fincastle and the Queen’s Staircase

Fort Fincastle is a giant building on top of Bennet’s Hill in the heart of Nassau. They built it in 1793, under the administration of John Murray. The fort was built from limestones, and it shape may remind us of a steamboat. It first served as a viewpoint, aiding protection against looters headed towards the port. Later, in the 1800s they used it as a lighthouse. The fort also has a water tower that can be reached on the famous Queen’s Staircase. The highest point of the island can also be found here, 38 metres above sea level. There is a wonderful view of the ocean from the top of the stairs.

Gregory’s Arch is an arch of more than a hundred years old, with a short bridge on top. It got its name from former governor John Gregory. The bridge connects Market Street and Duke Street, and it also separates downtown Nassau from the other parts of the island. The tunnel below the arch leads to the district called “Over the Hill”, as well as to Grant’s Town and Bain Town. The whole structure is like a passage between the different worlds of Nassau – between past and present.

The official residence of the Bahamas’ governor-general is located on Mount Fitzwilliam, on a site of 10 square hectares. The pink-white building was built-in 1801. It is a great example of the combination of Bahamian and British architecture with its unique colours, graceful pillars and wide, round driveway. There is a statue of the famous explorer, Cristopher Columbus on top of the staircase to commemorate his disembarkation in 1492. It was brought to Nassau from London in 1830, and it has been watching over the town since.

Pirates have a significant part in Nassau’s history. The Pirates of Nassau Museum honours the difficult times when the Bahamian waters were ruled by these criminals. In the interactive showroom, we have the opportunity to get an insight of maritime life during the centuries where pirates were present in the area. We can even get on a pirate ship and listen to the historic stories of the past. Sound effects and reproductions of the bloodiest events of the islands will also boost our experience.

Other sights to see in Nassau

If we have worked on our tan long enough, and got to know everything about Nassau’s history, we can choose from several other exciting activities. We can try our luck in one of the exquisite casinos on the island, have a party, and try the gastronomic specialties as well.

The delicious rums in the Caribbean region have conquered the world. Nassau is the best place for tasting authentic rums. John Waitling’s, the most important distillery on the island, is located on the 2-hectare territory of Buena Vista Estate. It has a garden with a wonderful view of the port; the hundreds of years old olive trees make the sight even more charming. We can smell the mesmerising scent of rum coming from over a thousand white oak barrels in the storehouse. We also have the opportunity to get an insight of the traditional bottling process here – the way it’s been done by the locals for decades. During the rum tasting tour, we can try the famous beverages of the distillery including the Amber and the Buena Vista rums, the Red Turtle vodka – filtered with pink Eleutheran sand – as well as the famous gin of Andros.

The Atlantis is the most famous attraction on Paradise Island. The giant entertainment complex offers exquisite restaurants, luxury shops and casinos. Its symbol is the Royal Tower building complex, the most interesting part of which is an aquarium with a sunken city theme, located on the lower level. This channel, full of sea creatures, leads to the Aquaventure waterpark, which is the most popular section in the complex. The territory of the park is 140 hectares, and there are giant rides. The most popular one is the 6-storey Mayan Temple which consists of 4 slides of different sizes. The tower called Leap of Faith offers an almost-vertical drop into a tank full of sharks. Of course, all of the rides are completely safe, as the predators are carefully separated from visitors. On public holidays, the park is practically full, so we should expect long queues.

Traditions and events in Nassau

The Junkanoo Summer Festival is a large street parade based on the traditions of the Akan people of Ghana and Ivory Coast. They organise it every year in July, and the main venue is Nassau. People celebrate the unique traditions and diverse culture with spectacular costumes, music and dance. The festival has an exciting and colourful list of programmes that tourists and locals both enjoy a lot.

Labour Day was started in 1961 by Bahamian politician Sir Randol Fawkes. During the event, different trade unions and political parties organise a spectacular parade with colourful costumes. The celebration takes place on the first Friday of June in downtown Nassau. Parade-goers are usually accompanied by music. The event ends on the Southern Recreation Grounds with speeches from the representatives of trade unions and political parties.

The fair called Creative Nassau is organised every two weeks. Visitors can choose from a wide variety of authentic local products: they sell different items such as jewellery, clothes, paintings, ceramics and local groceries from Bahamian craftspeople.

During our holiday in Nassau, we should try the local cuisine as well. Not surprisingly, frutti di mare plays a key role in Bahamian cuisine. The surrounding waters supply the island with fresh seafood, for instance, the conch. They prepare it in several different ways including frying, and they also put it in soups and salads. Other specialties include the roasted spiny lobster, the baked snapper or the grilled perch. As for soft drinks, the two most famous sodas are the Goombay Punch and the Bahama mama. For those who have a sweet tooth, we recommend the rum cake and the guava duff.
The diversity of Nassau is incredible – regardless of what you are looking for, you will definitely find something close to your heart. Don’t hesitate, and visit Nassau for your next vacation!