What to do in Sardinia: Discover the second-largest island of Italy

Home » What to do in Sardinia: Discover the second-largest island of Italy

When you pass by Sicily by boat and continue in the northern direction, you’ll see how Sardinia emerges from the water. After Sicily, it is the second-largest island of the Mediterranean Sea with a territory of approx. 24, 000 km2.
Sardinia offers many chances for those who decide to discover the coast of the island and want a less popular island than Sicily. Sardinia is a popular destination for families and groups of friends. It is especially popular in July and August, but still not too busy, since it is more difficult to approach. The best periods to visit Sardinia are the early and late summer. Sardinia also has a special game world due to its relative isolation. The island also has several historical towns with local sights. Local cuisine is characterised by strong flavours from wines to dishes.

This article will introduce Sardinia in the following points:

Sardinia is located west of the Italian coast and north of Sicily. The island’s coastline is 1, 897 km long. The northern and eastern shores are rocky, while the southern coast is sandy. In the vicinity of Sardinia, there are several smaller islands: Asinara, Sant’Antioco, San Pietro, Maddalena and Caprera.
80% of the island is covered by mountains and hills.It is not only lovers of waters, but hikers also who find great entertainment here. Sardinia and its neighbourhood are always windy because it’s far from the mainland. Due to the same reason, it is always embraced by huge waves and the sea is rarely calm there.

The most famous winds are mistral (from the northwest, mostly blowing from Corsica), Tramontana (northern), Levante (eastern) and Scirocco (southeastern). Due to these winds, the islands are a favourite place of lovers of water sports (especially surfers) and the water temperature makes the island suitable for sports and swimming all year long. Check the sailing conditions and wind rose diagram of Sardinia.

What to do in Sardinia: Where is it worth mooring?

Alghero is to be found at the west of the island. Port of Alghero is here with 400 permanent mooring spots and it is 150 meters long. Due to its size, it cannot welcome yachts larger than 50 meters. The port is open all year round and you can see a spectacular of the old town from here.
The city has many programs for visitors. Exploring the old town is wonderful entertainment and you can find the secrets of the past when you visit various towers and cathedrals. If you look for a more active holiday, you can spend your time with mainland and water sports, starting from scuba diving through surfing to biking. You can also go for a whale and dolphin watch.
You’ll not miss the pleasures of gastronomy either. Sardinia’s gastronomy is versatile and delicious and will make your time spent here memorable. Read about what to do in Alghero. 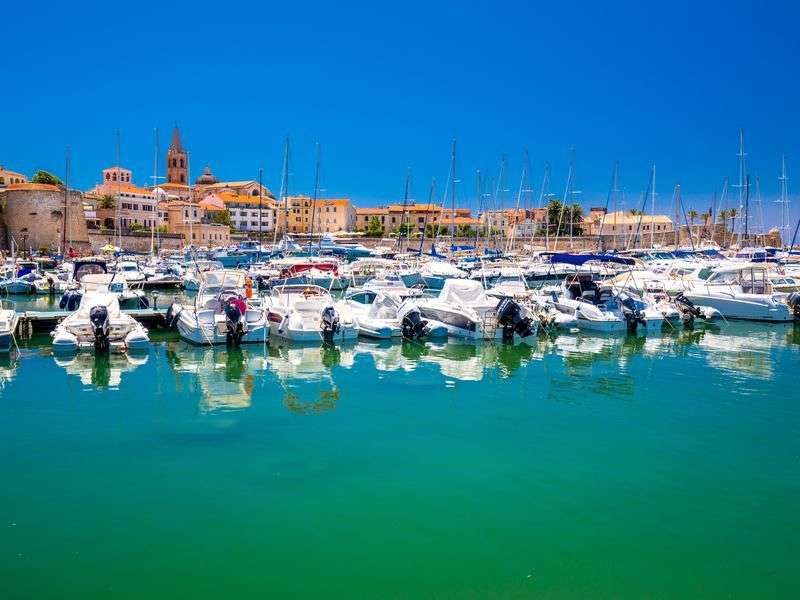 Cagliari lies in the south of Sardinia. Port Marina Portus Karalis with 118 ports is in the direct neighbourhood of the old town. It can receive yachts as long as 90 m.

Cagliari is the largest city of the island. Due to its Mediterranean climate, the winters are mild, that’s why tourists arrive here each day of the year. The magic water of Goldo Degli Angeli (Bay of Angels) enchants tourists as they arrive. Cagliari was built on seven hills, which are now separate districts of the town. When you get off the yacht, you get a chance to discover the beauty and famous buildings of the city.

When you leave the historic sights and buildings behind, you can try different water sports (surfing, scuba diving, water skiing) or you can dip in the pleasantly warm sea and lie in the sun at the sandy beach. Read about what to do in Cagliari. 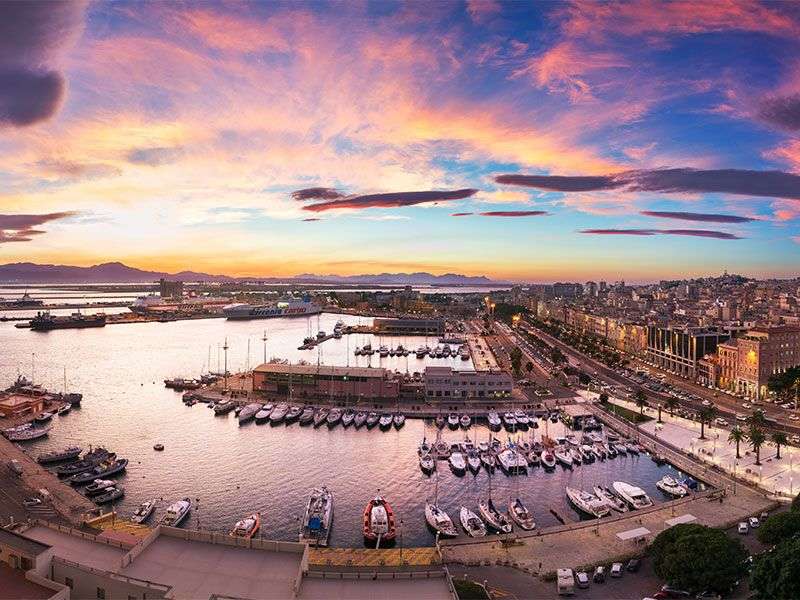 Passing by Sardinia you find the island of San Pietro a few kilometres away, from where you should head for Carloforte. The port Marine Sifredi has 250 mooring spots for yachts or sailing boats as long as 60 meters.
After visiting the historic sights of Carloforte it’s worth to take a motorbike tour around the island, which has many beautiful beaches, all perfect for swimming and water sports. Read about what to do in Carloforte.

Things to do in Sardinia: The most beautiful beaches of the island

When you watch the horizon, you can see that there are many small islands a little further away and this creates a pleasant atmosphere to the view. It’s worth visiting this beach, even if it is full of tourists.

If you sail a little to the east but stay at the north, you can see Porto Pollo. It has a wonderful sandy beach and the sea has good waves for surfing and swimming.
On the north side of Sardinia rocky and sandy beaches follow each other, but on the eastern side, you only find beaches with rocks, which also offer a picturesque view. 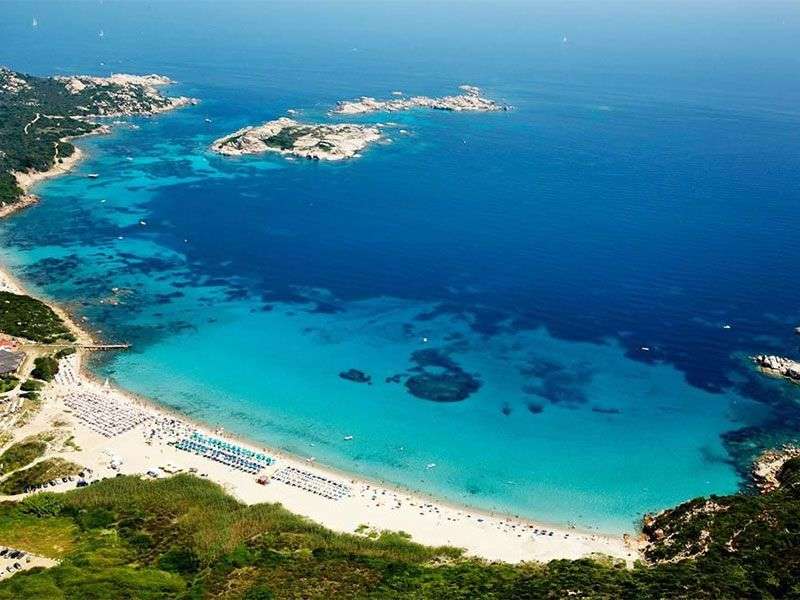 One of these beaches is Cala Goloritze, which is to be found at bay Orose. The white beach is decorated by small pebbles and the turquoise coloured sea makes a dream-like atmosphere on the beach. The rocks around the beach stimulate many people to climb them, that’s why you don’t only meet swimmers, but also mountaineers here.

What to do in Sardinia: Neighbouring islands

The islands of Sant’Antioco and San Pietro are on the southwestern side of Sardinia. The former island is connected to Sardinia by a bridge because a shallow sea strait and Laguna lakes separate it from other islands. San Pietro is only accessible by sea. Sailors and scuba divers can find a rich water world in the islands.

Sardinia’s third largest island, Asinara, is not far to the north from the main island. Asinara National Park that was established 21 years ago, can be found here. It functioned as a prison island in the past. The national park protects the historic buildings an

d the plants and animals of the island. You can see white donkeys here, which gives the reason why the island is also called the empire of donkeys. 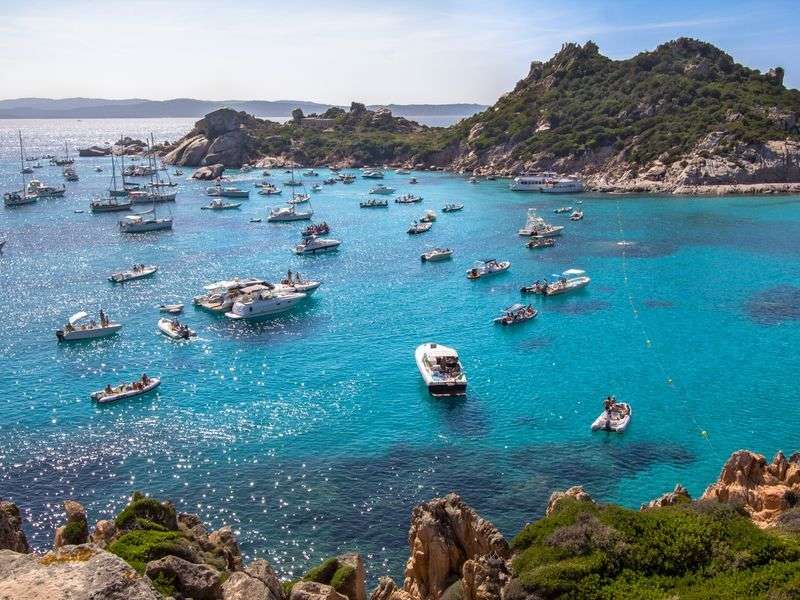 When you sail in the north-eastern direction of Sardinia, you can find the island group, La Maddalena. These islands are rarely inhabited and almost untouched. The pink coloured sandy beaches with crystal clear water area are a wonderful destination. Besides swimming and water sports you can also visit Roman ruins and fortresses here. Read about what to do in La Maddalena.

Locals are famous for enjoying life, which is no wonder, because the sea, red wine and Mediterranean cuisine are all within reach. The combination of beautiful bays, wonderfully blue sea water, the mountains and the untouched nature may mesmerize you. Discover the emerald green and indigo blue sea and the snow white and pink sandy beaches. Discover the versatile Sardinian dishes and cultural traditions. It is a perfect travel destination for lovers of sunshine and sea. Read more if you plan sailing in Sardinia or yacht charter in Sardinia.